Lakes in other parts of the state have weaker thermal gradients because lots of snow blanketing and insulating the ice. West Two, Shageluk, and Tsa' Bene' lakes for example. 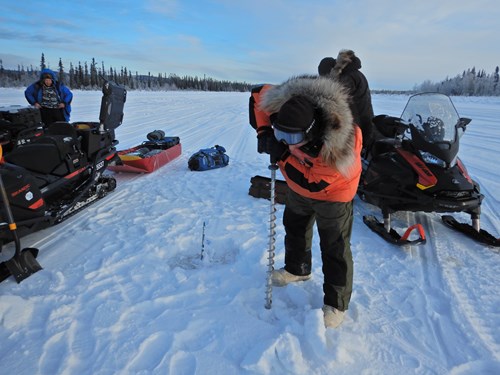 We also need to be cautions when interpreting buoy data as other factors like snow ice formation and overflow can cause our sensor to be at different depth than we originally intended. For example, on our recent January Shakedown Trip we recently visited Sam Charley Oxbow near Fairbanks and found 67 cm of ice even though the sensors where telling us 40 cm. About 20 cm of snow ice had formed above the buoy surface causing this discrepancy. For buoys located near Community-based Monitoring Teams, we developed a Fresh Eyes Lesson Plan to explore data from snow-ice buoys and help Fresh Eyes scientists make corrections to these data.